Like many Californian settlements short on history but long on sentiment, Santa Rosa makes much of its Historic Square.  The march of progress since 1833 has seen the Square overshadowed by an elevated section of Route 101, which is currently being widened.  The disused stone-built station has been converted into a tourist office — though it’s a sign of another kind of progress that the railway should be rolling again by 2009.

And at one side of the Historic Square is the Aroma Café, a long, single-storey building.  It’s here that Shannon and I often go to write.  It’s the antithesis of Starbucks, and at peak times there are queues out of the door.  We regularly drive twenty minutes to get to it.

After 16 years of travelling in the States, it’s the first place I’ve found that does really good tea: Irish Breakfast.  I learnt to buy 20oz cups, rather than pots because I found that by the time I reached the end of the pot the tea was so strong I got a caffeine headache — something I’d not had since giving up coffee fourteen years ago.

There’s a wonderful, understated quirkiness to Aroma’s.  Your order is taken with your name on it, so you and the staff get to know one another on a first-name basis.  There are no staff uniforms, and the young crew come in a variety of clothes, a multitude of piercings and a gallery of tattoos.

There’s free wireless connection, but that’s where the welcome ends because the power sockets are papered over with notes saying ‘You will be asked to leave if you use this socket’.  Shannon and I bring extended battery packs.

Shannon in the Aroma Café

But if the warmth of the welcome to laptop users is un-American, the health information is not.  There are cards posted at the counter — and even in the toilets — telling you just how much caffeine is in your beverage (see picture – click for larger view).  And in a nod to its effects, the café has a free water dispenser with proper beakers. 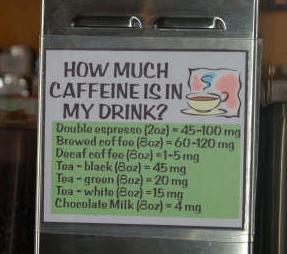 It begs the question as to whether the owner is afraid of patrons either ‘driving under the influence’ of caffeine, or concerned about future lawsuits relating to kidney stones due to dehydration.  And it finally puts paid to the myth about tea having more caffeine than coffee.

This entry was posted on Friday, July 28th, 2006 at 10:43 am and is filed under Travels through my life. You can follow any responses to this entry through the RSS 2.0 feed. Both comments and pings are currently closed.