Apple iPad vs Blu-Tack – which is more useful? 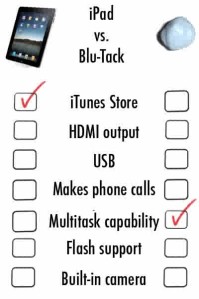 Which is more useful - iPad or Blu-Tack

I’m grateful to Halid Delkic, who sent me the above graphic earlier today. In fact, the above is incorrect – Blu-Tack will actually take a USB device. Indeed, it’s versatile enough to accept any connection.

Furthermore, Blu-Tack will work in most environments, won’t run out of power or crash just when it’s at its most useful, will fit any surface or space precisely, is compatible with PC, Mac or any other operating-system, is almost infinitely expandable, usable by young and old alike with no training, ultra lightweight and not cumbersome, won’t break and does not need to be turned off during take-off and landing. Although neither product will work underwater, Blu-Tack will work again when dry.

Oh, and for those who think the iPad is brilliant because the picture rotates to stay upright, let me just point out that it won’t work in zero-G. With Virgin Galaxy heralding in the age of space tourism later in 2010, Apple’s designers have at last shown themselves to be the has-been bunch of atavistic future-phobes that they really are.

I co-wrote this quick radio sketch with Nathalie Turton and Dominic Vaughan in November 2009. It is performed by me. The remit was to write an over-the-top trailer for a TV programme. For more of Nathalie’s work, go to: www.lollyandnat.com

The sketch is available to listen to at the bottom of this page:  http://markspeed.co.uk/Sketches.html